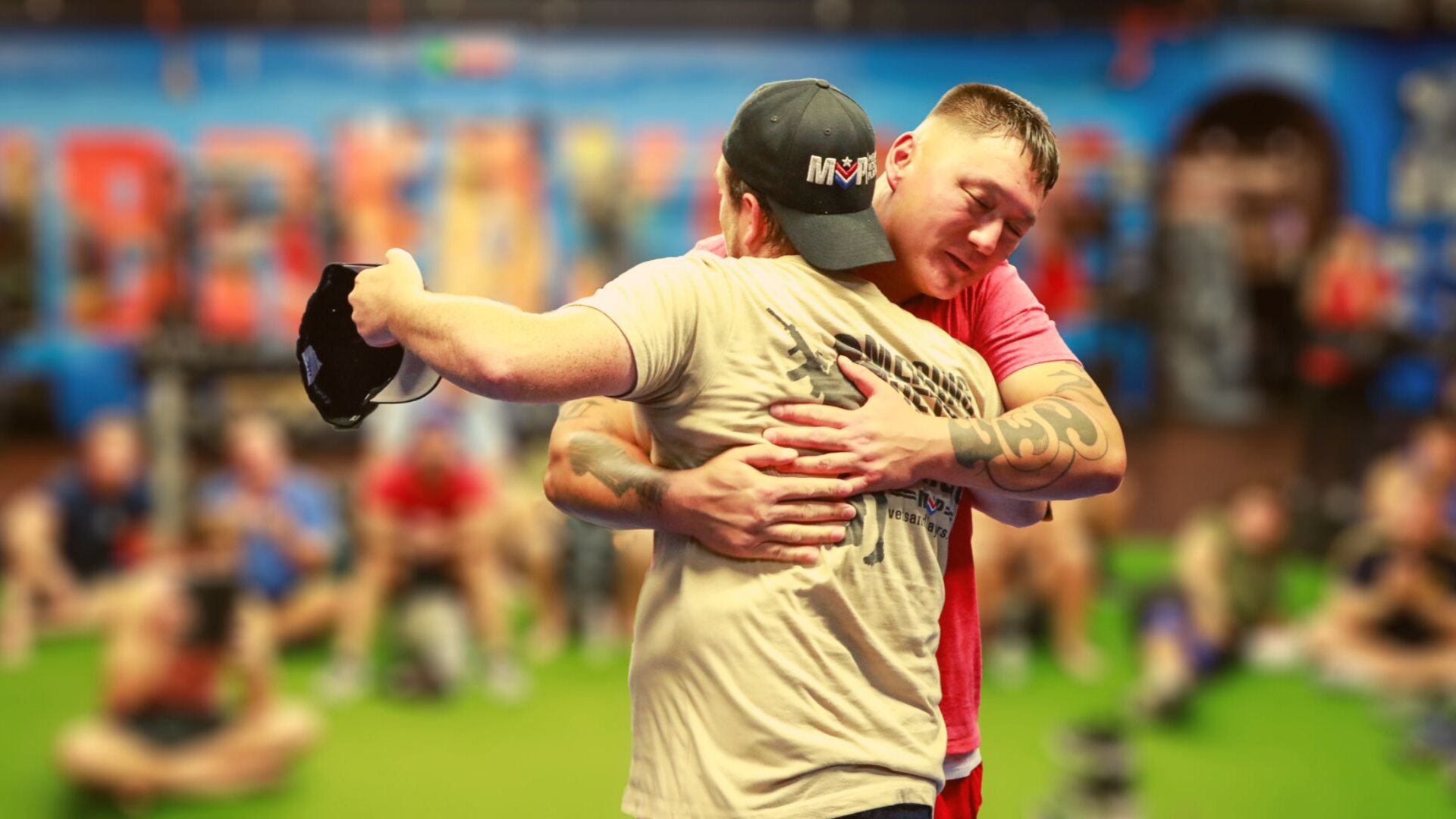 The Real MVP: Merging Veterans and Players to Build a Foundation for the Future

“The MVP organization was started by Jay Glazer and Nate Boyer back in 2015,” explains Executive Director, Jacob Toups. “Jay Glazer has been in the sports industry for 25-plus years, so he’s been interviewing and tracking athletes for most of his career. Nate Boyer was a Green Beret, and was on the Seattle Seahawks—he landed in Los Angeles after his time in the NFL.

“Nate eventually crossed paths with Jay—both had noted that Jay had been having side conversations with former NFL athletes about the lack of support in transition, which led to challenges, whether they were in finance, divorce, mental health, the loss of camaraderie and team, and the kind of support that can power you, or empower you, through the tough times. Nate was having the same conversations with some of his fellow veterans in his network. And so, they decided to do something about it.”

The result was Merging Vets and Players, or MVP.

“The organization is a peer support group for combat veterans and former professional athletes, who are struggling in transition. So, what that really means for our program model is that we do an hour of physical activity, which leads into an hour of what we call ‘the huddle.’ Nate and Jay, knowing that neither of them were clinicians, and really wanting this program to be what we might call mental health ‘lite,’ wanted to bring something beside the physical activity component to allow participants to open up about the challenges they were having, and become vulnerable.” 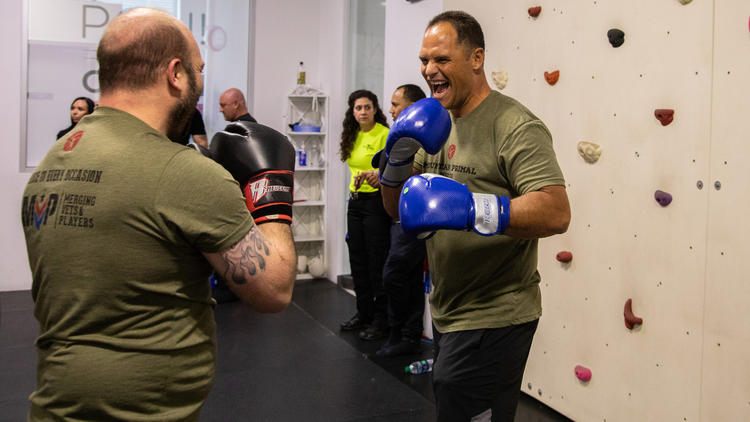 In order to build a structure for the idea, the group consulted with a longtime leader in the field of veterans’ mental health, Suzi Landolphi, formerly of Boulder Crest Retreat in Virginia. “Nate and Jay, when they visited Boulder Crest Retreat, asked, look, you’ve been doing this for a while, what can we bring back that wouldn’t be hurtful, but would be healing for the folks in our community, particularly because we are going to use a mental health ‘lite’ approach. And what she advised them was that they could bring back the ‘fireside chat’ that they use to debrief at the end of their retreat—they realized that something similar could be a great component to add to their model.

“In our program, the huddle is a free-form conversation where folks will introduce themselves if they’re new, open up about challenges that they’ve had each week—maybe they’re flashing back to times from their service or sports career, maybe they’re dealing with things from before, or their childhood. It’s open for people to talk about all the things they’ve been going through over the last six days (since our program operates weekly). It’s also an opportunity to talk about successes, whether it’s career goals, going from homelessness to getting into housing—folks really making those steps from small wins to big wins.

“We want to celebrate all of that—we realize that our tendency as humans is to only celebrate the end goals, but we know that you didn’t wake up one day and suddenly have a job. We want to make sure all the steps along the way are celebrated as part of that process, that journey.”

The program partners with a series of community service programs, and runs monthly community events for MVP participants and staff, as well as those people connected to participants (like family members and friends).

It’s also a way to reach more people struggling with the same issues—a huge number of veterans, and even former athletes, are not raising their hands and asking for help. Toups and MVP hope that by shifting the narrative to one of goal-setting and empowerment will help change that. That, and keeping the program free (not only financially, but from some of the lengthy bureaucratic processes that can slow down access to care) are conscious decisions to help widen the funnel.

This three-pronged approach, with physical, mental, and community components, is built to help with what Toups calls ‘transition time’—that period between life as a soldier or athlete, and the next chapter of life.

“The ultimate goal is supporting people through that transition time, and potentially to shrink transition time, maybe from five, to three, to two, even one year, by building on those small wins and goals and translating them to big wins after their high performance careers.”

That includes assisting with getting participants access to further, or more expert, help.

“Sometimes we will have peers within our program guide them through the VA system to help expedite their claims, connect them with player alumni programs, or whatever else they need; we’ll research other mental health programs—there are good retreats out there that we can refer them to, etc. Any professional development or other services, we want to refer them to people who are already doing those things really well.”

And the support continues when participants take the next steps.

“When veterans and athletes finally get into the workplace, but still feel out of place, they can come back to our program week to week, and say hey, I’m still in this transition, no one really understands who I am, but I’m glad I can come to this place every single week, and feel like people understand me. It helps release stress and anxiety, and hopefully it means that they stick with it and keep working toward their new goals. The foundation underneath them is still there.”

On Valuing a Data-driven Approach

“In my last job, I was working on AmeriCorps grants,” says Toups, “and as we all know, federal and state funding from the government is very hard to obtain, and once you do have it, you need to make sure that you have very clean data. But the benefit of having good systems in place for data collection and evaluation helps you feed back into your program and make it stronger from year to year. And we really, really value that because that at least means you’re trying to serve your participants better every single year. That is accountability, and that’s what we owe to the people in our community.

“When I first came on at MVP as Executive Director, I really wanted to make sure that at the very least we were collecting some kind of baseline data. What we’ve been able to collect is retention data, recruitment stats (how many people are coming into the program), and program dosage. But , from these baseline data points , we can start seeing basic outcomes.

“I started that process a couple years ago, using UpMetrics, so that I could have some sort of reporting, and start looking at trends. We want to start seeing an MVP member who has been in the program for a year, the program dosage looks like they go to 50 of the 90 possible hours of programming at our location in Los Angeles—interesting, around the mark of 40 hours of participation is where we start seeing them hitting goals of launching their career, or other transitional elements. Again, this is our program model theory of change, but that’s the kind of direction that you can start to go once you have baseline data collection practices and metrics in place.

“We also had conversations with the Bob Woodruff Foundation, which is a big supporter of the veteran community, around logic models—making sure that we’re looking at inputs, outcomes, etc., in order to build and prove our logic model.”

The result was the launch of a series of case studies, following eight individuals participating in MVP programming over a year-long period, from January 2019-January 2020. (The results are forthcoming.)

“Then, we want to take those case studies to the next level, by overlaying our program data. By combining our data from the individual case studies with the overall program data from UpMetrics, we can start to ask questions like, where are we seeing the point of inflection?

“Those are two directions that we’re already working on, but the third and most exciting, is that we’ve built a goal-setting tool, where we sit down with members at the zero-month mark, the six-month mark, and the 12-month mark and look at personal, and professional goals. We don’t set them—we ask the participants to come with those goals in mind, whether it’s launching a career, securing housing, practicing mindfulness meditation or whatever it may be. Then, we’re going to overlay that with the data from UpMetrics on program dosage, and how often they come to programming, to see again, and start to pinpoint where exactly people are excelling, and where we play a part in that. I really value that because it allows us to evaluate our programming and potentially tweak our model. It helps me to know if people are saying hey, we need more of this component of the program, then we can allocate more resources toward that, or add more sessions. It allows us to be more intentional, when it comes to program structure as well as taking feedback in terms of what’s working and what’s not. It’s data that we funnel up to our board to review, so that our board can understand where we are, and how we can improve.

Thanks very much to Jacob Toups for the interview! Photos courtesy of Merging Vets and Players. Learn more about UpMetrics solutions.