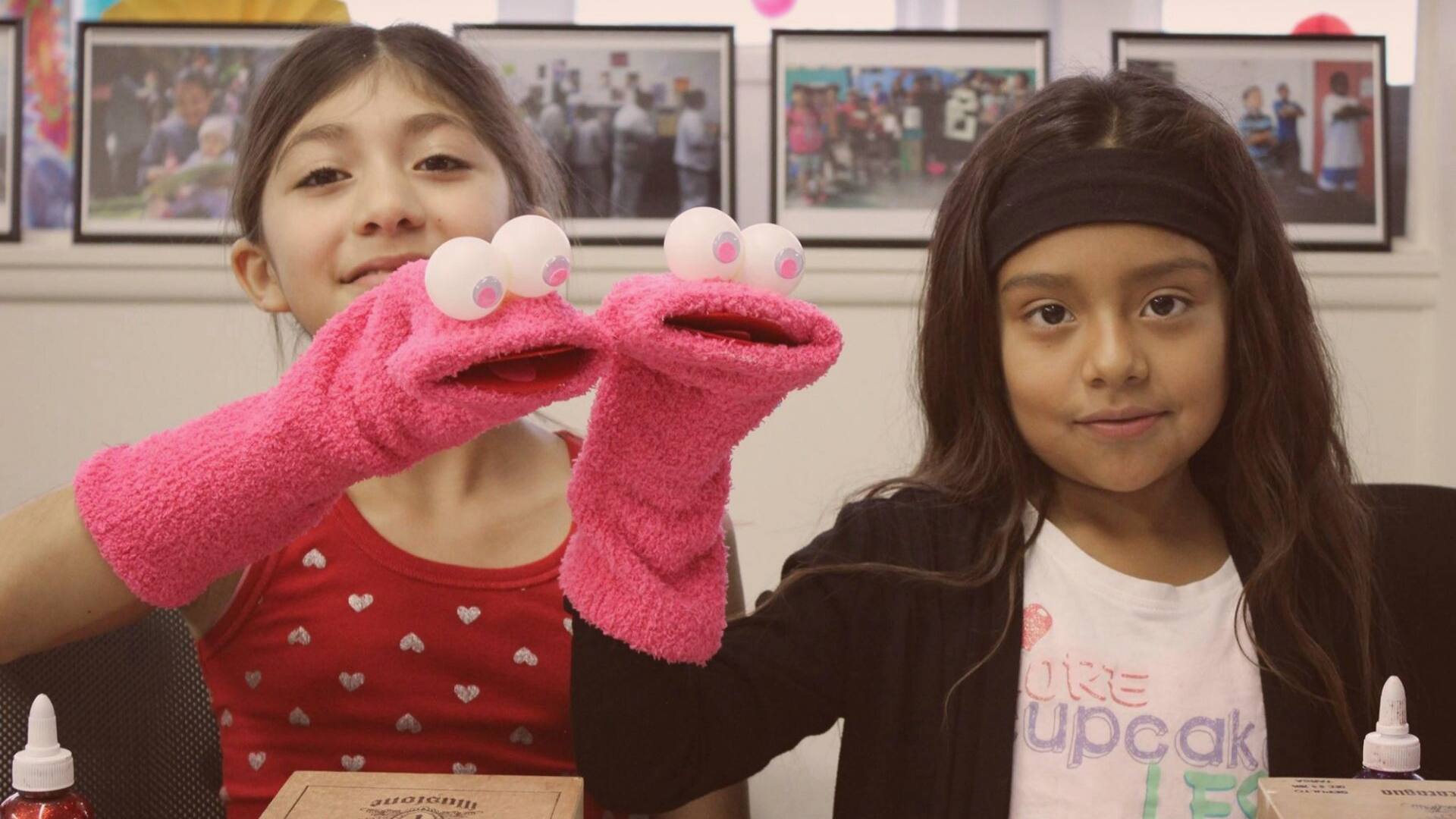 Finding Their Voices: How Jill Gurr and Create Now are helping at-risk kids go from struggling with literacy to writing a narrative for the future

Walk into the office at Create Now in Downtown Los Angeles, and it’s immediately obvious that everything centers on the kids. In the second story of what looks like a former warehouse, rooms are filled with music equipment and art supplies, with a recording studio located near a drumming room that’s lovingly built into a closet, the egg crate foam insulation hand-applied to the walls.

What’s also clear is that this place matters—not only to the staff and volunteers, but to hundreds of kids who learn essential skills through the arts. Their smiling faces cover the walls in the small office, and their work spills out of crates in the arts & crafts room.

Out of a void, Gurr and Create Now have built a community, in a space that, while functional above all, has the sense of a family home.

Still, most of their work takes place away from this safe space, at emergency shelters, foster group homes, detention facilities, rehab centers and at schools where poverty-stricken students receive zero arts education.

According to Gurr, that willingness to go out into the community has meant Create Now has been able to reach more than 40,000 children since its inception.

“The story is that I was working on films as a script supervisor, and I had an experience where I saw two children on their own, wandering in the streets in the middle of the night, in East LA,” explains founder, Jill Gurr.

“I asked where their parents were, and the eight-year-old said, ‘I don’t know where my mother is, and my father don’t give a f -- k.’

Gurr was stunned. “It blew me away.”

“I don’t have children, but when I saw those kids on the streets, it just hit me that there are all these children who don’t have parents. How many others are out there? These kids weren’t even in the foster system. When I saw the need, I felt that I had to make a difference.

“I did research, and spent a year trying to launch a volunteer program at all the probation camps, and nobody would return my calls.”

“Then, in 1992, the riots happened. I joined a volunteer group, and I met a wonderful woman who worked at Optimist Youth Homes, which is a detention facility in Highland Park. She got me through all the red tape, and it was exciting and a little scary. It was an incredibly educational process for me, and for them.”

It wasn’t an easy introduction into youth mentoring. For Gurr, finding a way to connect and engage was essential—how exactly to do that wasn’t clear, especially to start.

"It brings tears to me every time, thinking about that first workshop, that first story. Here we are years later, and that story is still so powerful."

“This was at a juvenile detention facility in Highland Park, with 100 teenage boys locked up for everything from rape, to assault, to attempted murder—you name it,” Gurr explains.

“What was interesting about the process was that, on the first day of class [30 of the boys participated in the first workshop], I got them working on this project together: I had them take turns acting out scenes, and I tape recorded everything.

She continues: “I went home, transcribed it into screenplay format, came back the next week and had them take turns reading the text while sitting in a circle, taking on characters. If a kid couldn’t read, he would just say ‘No, I’m out.’ But they were participating. And it was their words. Their profanity. Their language.

“Just hearing their words, I could see their confidence rising. The kids who couldn’t read were learning.”

Gurr was overjoyed—she was reaching these kids. They were learning, engaging, and taking on the challenge.

But that sense of elation was short lived.

“After that class, we broke for dinner. I had suggested that we add a happy ending to the story, being a Hollywood screenwriter. But one of the students, a Latino gang leader named Ricardo, said, ‘No, that’s bulls — t! We would fight to the death!’ I realized that this was going to be their story.”

Ricardo persuaded the other boys to boycott the class. Fortunately for Gurr, and for the students, her experience as a script supervisor had connected her to Edward James Olmos—one of his friends, an actor whom the students recognized, came to the class to help Gurr earn their trust.

“At the final read through, we had all the kids there,” says Gurr. “I had edited the ending of the story because I had come to the realization that many of these kids were there because they felt they were protecting their families.

“In the story, one of them loses a little brother. It was called Retaliation.

“The teenagers start to fight, and the mothers try to break them up—but then, in the background, you see the six-year-olds playing together. It’s just this small image of hope.”

Speaking with Gurr even now, it’s apparent that this was and is an emotional moment for her.

“It brings tears to me every time, thinking about that first workshop, that first story. Here we are years later, and that story is still so powerful.”

“Based on that success, I taught the same program at a co-ed facility. I thought, updated Romeo & Juliet, let’s see what the kids do, and they took to it.”

Those experiences led to the first investment that Gurr received.

“I shared my stories with another writer—she called the next week, and said my professor at the AFI [American Film Institute] wants to give you $5,000 to start a nonprofit. Create Now [then called ‘Write Now!’] was born. That was 1996.”

It was exhilarating but also intimidating—Gurr’s background was in film production and screenwriting, after all, not in nonprofits.

Knowing that she had been able to reach those first students she had worked with made her want to commit more of her time and energy to the program, but that came with a cost—often, she was faced with a choice between pursuing a career that she loved, and giving her time to build Create Now.

“I had no idea what a nonprofit was. I was still working on movies, and traveling, and writing. Over the following few years, I would get things going, start some mentoring relationships, gain a little momentum, and then I would have to go off on location [for a film], and things would fall apart—maybe one or two relationships would stick.”

That kind of back-and-forth lasted for some time, until a fateful moment in a rainforest in Central America.

“I was on location in Costa Rica, in the jungle, and I slipped and fell,” Gurr remembers.

Her ankle and leg were broken, and it required several surgeries. That meant that she had to take time away from her life traveling for work in the film industry, and could focus on what had become her true passion project: While recuperating, Gurr focused all her energy on giving Create Now the attention it needed to grow.

“The stories like those where a child who might not have been able to read is now inspired to be a writer—that’s what has kept me going over the years.”

Gurr ran programs in Florida while recovering from surgery, and then returned to Los Angeles to pick up where she had left off, increasing Create Now’s reach in Southern California and expanding program offerings.

“I realized that we could transform these kids through all the arts,” Gurr says. “We had been focused on this narrow artistic discipline, writing, which was very hard for many of these high-risk youth to do. By using all the arts, we expose them to many creative expressions like dance, music, visual arts and so much more. They often learn how to write — through songwriting or designing comics and graphic novelettes. That sort of idea.”

“It has been a struggle,” she says. “For the first 18 years, I volunteered full time, ran up my credit cards, etc. I was finally able to make the transition from working on movies to commercials a number of years ago, which kept me going, and I could still devote most of my time to Create Now.”

That transition has had lasting, positive implications not only for Gurr, but for Create Now—it means that now this nonprofit has more funding to buy arts supplies and equipment, and four full-time employees along with some part-time consultants.

"You could be taking them hiking, or to the beach—it doesn’t matter. It’s about them knowing that there’s someone who cares; that they’re not alone."

“Now, we’re finally getting the funding, the recognition, hiring more staff to make it easier to expand.”

In addition to running programming at Create Now, Gurr also authored a book, Mentor Youth Now, which compiles experiences of youth mentors from across the US, including her own.

“It made me realize that while the arts—and I have a whole chapter dedicated to the arts—are powerful and impactful, it’s really about the relationships that kids form with someone who cares about them.

“You could be taking them hiking, or to the beach—it doesn’t matter. It’s about them knowing that there’s someone who cares; that they’re not alone.”

And while those personal relationships are at the core of Create Now, Gurr is also conscious of the bigger picture.

“There is a ripple effect—it doesn’t just affect one child. This work affects the whole community.”

Photos courtesy of Create Now. Learn more about Create Now by visiting their website at www.createnow.org.